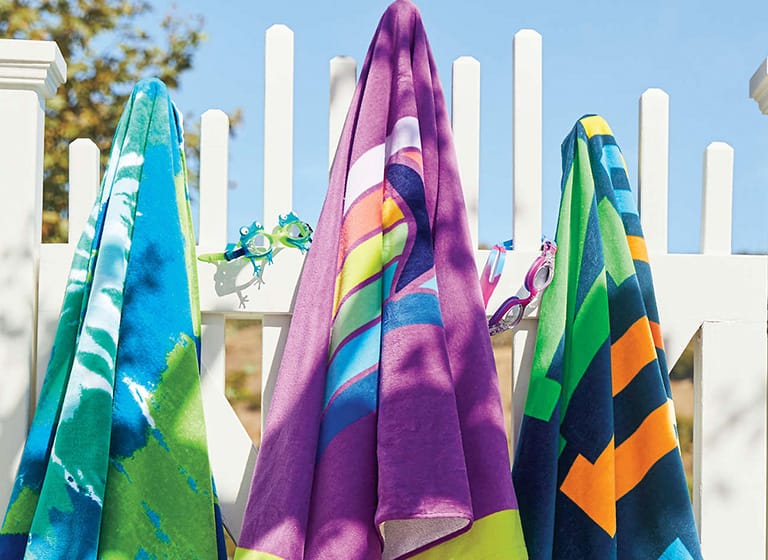 Everything You Need to Know About Beach Towels

Can you use beach towels as bath towels?

Yes! A beach towel can absolutely pull double-duty as something to dry off with post-shower. The best candidate in this scenario would be a beach towel made of 100% cotton, which will feel softer against the skin. Since beach towels tend to be slightly thinner than regular bath towels, they’ll dry a lot faster too. A little fun fact to make you aware that beach towels might be better to take to the gym with you for your post-workout shower before work since you need a fast-drying towel to avoid lugging around a heavy wet one.

Can you wash beach towels with clothes?

You can wash beach towels with clothing, but you should make sure to remove as much sand as possible before washing. Always give your towels a good shake before leaving the beach, and if possible try to hang them up before washing to remove even more sand. Hang them over a rail or a foldable chair outside for the day so you can let even the smallest of breeze help shake off little traces of sand.

Never put a sand-filled towel in your washing machine as this can cause blockage by clogging the drain and drain pump. When washed with clothes, sand can actually ruin some articles of clothing because of the abrasive texture. To be safe, it’s best to wash towels in a load by themselves if you’ve used them in the sand. If not, then there is nothing to worry about when combining clothes and beach towels. Be sure to shake out your water shoes, swimsuit, and swim trunks if you plan on washing them in your washer as well.

What is the best size for a beach towel?

There's no hard rule for what the ideal size of a beach towel should be, but for many reasons, a longer, wider, beach towel is more desirable. We find that a towel measuring six and a half feet long is best for wraparound comfort (something you'll appreciate after a quick dip in cold water or once the wind starts to pick up). Towels that are three feet long, or more, will have enough space to comfortably fit you, a book, and maybe even a waterproof speaker. The size also depends on what else you’ll be using it for. If you plan on laying your beach towel down to sunbathe, we recommend that it be a little longer than your height so you can comfortably fit.

How do you fold a beach towel?

Folding a beach towel is a simple task. All that's required is to pick it up by the two corners of a shorter side (here's where you give it a quick shake if you've been in the sand) and fold it in half, lengthwise. Then fold it again, horizontally. After this step, you can fold it in half one more time lengthwise to make it short enough to carry under your arm. In some cases, rolling a beach towel is more convenient than folding. When rolling, you can fold it once lengthwise and from there roll it as tight as you’d like.

What are some fun ways to monogram a beach towel?

When it comes to monogrammed beach towels, the monogram choices are almost endless (so long as the message stays below 10 characters). Adding your name to a beach towel is a practical choice, but there are some more creative ways that you can have fun with the process. You can spell out "head" or "feet," if you think a towel is best when it comes with directions for laying out, (especially for younger kids), or skip words altogether and add an anchor, a desert island, or even a scuba diver.

Should you bring your own beach towel on a cruise?

The great majority of cruises provide beach towels in their cabins, so bringing your own isn't a necessity. However, if you've grown used to the comfort and size of your own beach towel, we certainly won't discourage the choice to bring it along. Pair with our great canvas totes & beach bags and you have the ultimate in vacation luxury and functionality!

Where else can I bring a beach towel?

If you’ve got a pool at home, some people prefer to use beach towels outdoors to keep their bath towels separate, especially if you have white bath towels since they can get stained outdoors. If you’re throwing a pool party for one of your younger kids, having towels monogrammed with their guests’ names make perfect party favors. Even if you don’t own a pool and are planning on having a summer party with water games, personalized beach towels are a great idea so that they have something to dry off with and take home with them as party gifts.

Beach towels also work great for picnics at the park since it makes the clean-up a little easier. Whether you’re planning a picnic with the kids, friends, or your significant other, make sure to bring a few instead of just one to cover more ground. We suggest one towel per person and one to place the food such as a charcuterie board and a cooler full of drinks so that you can keep the food from spilling and each individual has more room to spread out and maybe even take a quick nap under a shady tree.

Having beach towels in the car in case of an emergency is always a good idea. By keeping one or two beach towels in the trunk of your car, you can clean up any unforeseen messes (as parents you know this can happen all too well) or use them as a barrier when you leave your car under a hot sun and have leather seats, ouch! A beach towel can be placed over the car seat to protect you from getting burned especially when wearing shorts. For parents, it can protect your car seats if you’ve got kids in the backseat eating.