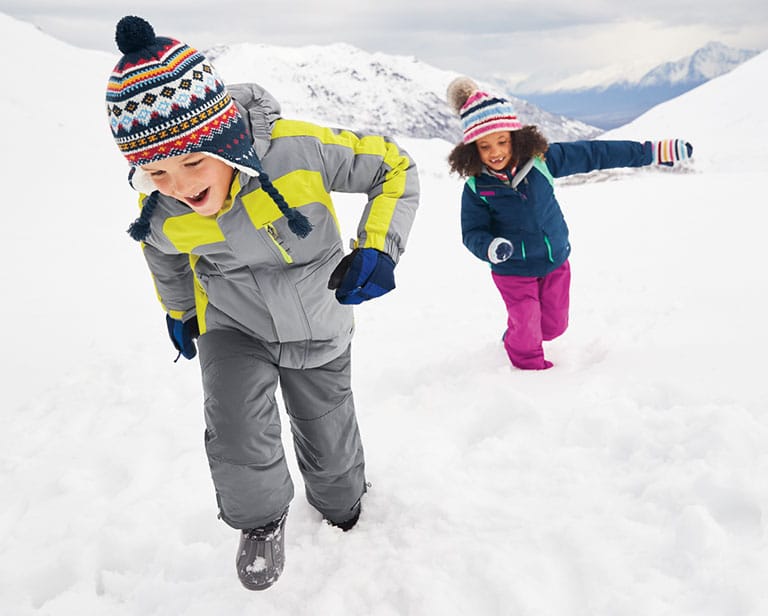 How to dress your kids for cold weather so they can still enjoy the outdoors.

As a stay-at-home mom of five, I've become a downright expert on things I didn't even know needed experts, like dressing to go outside in the cold. Today I'm going to let you in on a few tricks of the trade for getting your kid's warmest winter coats zipped and snapped, hats on, snow boots cinched and children out the door in less time than you think. It doesn't require you to have a baseball team's worth of children to be privy to this coveted information. Even if you have one child, these tips will come in handy.

Can you imagine getting your two year old, her three year old brother, and their four year old sister bundled and out the door on time in (of all places) Wisconsin? Oh, I can. Let me tell you, it was a tough act to master. By the time I had the four year old's winter coat zipped, the two year old would have already ripped off the majority of what I had dressed her in. And if someone had to take an "extra potty break" somewhere in the mix, forget about it. It took me until Baby #4 to understand what I was doing wrong. The secret isn't how you get them ready, it is what you are getting them ready in. The quality of what they wear and the specialized features designed in those items have the power to keep your little one warm when it is cold...very true...but more importantly, they have the power to keep you running on time and literally save your sanity on your most hectic days.

For toddlers, think snowsuits. All-in-one coverage is the single easiest thing you'll ever slip your sweet one in. It'll keep the snow from sneaking under their coats. Trust me on this – it's worth your time and sanity. If you don’t like the idea of a full snow suit, consider snow bibs. They still provide a lot of the same coverage, but they allow you to put your own coat and accessories on the top.

For cooler days, a girls winter parka with a zipper and rip/grip storm flaps works two ways. If they're in a real hurry and not exactly zipper savvy, they can cinch that storm flap and be out the door. When worn over a pair of, again, snow bibs, they'll be just fine. Especially if you're short on time. And yes, you read that right. I highly recommend snow bibs over snow pants until about age 8. There are no snaps to manage, the straps slip over their shoulders – complete independence booster for your snow fans. Look for pants with liners that tuck inside their boots. Or just look for the Lands' End label. All their snow pants have this awesome feature.

It's all about smart layers that don't restrict movement. Good long underwear has saved more days than most would care to admit. Once you have the layering game mastered, start thinking about features. With Baby #1 I shopped like: Aw. Pink with ruffles? Aw. She'd be so cute in this. Let me tell ya, by Baby #5 I was all about snow guard cuffs, snow pants with liners that easily and snugly tucked into snow boots, wind resistance, water resistance, dual closure fronts that zipped and snapped, quality insulation, temperature ratings, interior pockets to store an extra pair of gloves for kids...the whole bit. Knowing what they'll be up against when they step outside helps you select cold weather options that fight the elements for them.

Now that we’ve talked about a few great items that your toddlers and kids can wear in the winter, let’s put it all together. There are several capsule wardrobe items you can put together for your kids winter wear. When people hear capsule wardrobe, they often think that they will have to toss out a bunch of clothing, and that is not true. Yes, building a capsule wardrobe can mean getting rid of items, but it’s more about getting rid of items that you no longer use or need. So, for example, if you have four pairs of gloves for one child, but one of those pairs has holes, you don’t need to keep the gloves. It’s about doing more with less. Everyone’s needs are different, so take this list and make it your own. This is just a jumping off point.

Items to have for each child in your family:

In addition, your kids may want t-shirts, tunic tops, leggings, jeans, etc., but it really depends on individual style preferences and age. This list can all vary according to temperature and individual needs, as well. Items can also be layered. So, for example, you might not need a fleece to go under a big heavy coat if your thermals and a shirt are enough. With capsule wardrobes, it’s also important to make sure all of your items can mix and match. So, it’s okay to have a bright pink coat or fleece, but maybe keep your pants or snow bibs neutral–so they match everything!

A partner that understands:

Lands' End gets it. In fact, they design and test their cold weather wear to perfection specifically for that reason...almost like Lands' End somehow knows the closest thing to "me-time" you've afforded yourself since becoming a mother has been found during the moments your kids spend playing outside. Not to worry. Lands' End will keep them out there having fun a bit longer so you can recharge.