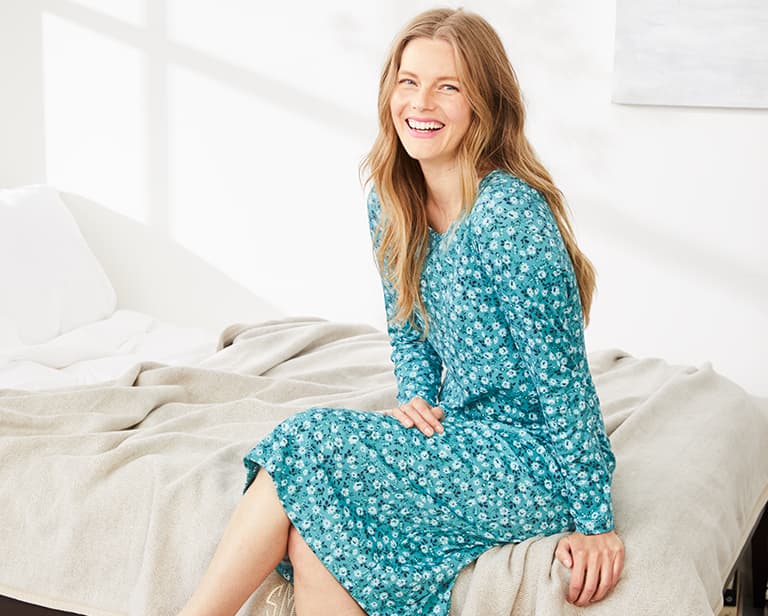 The History of Pajamas: Meaning, Origin, and Interesting Facts

Have you ever wondered why we sleep in pajamas? There are plenty of little known fun facts about our beloved PJs. To better understand, let's take a look at the wheres, whys, whos, and hows of pajamas.

Where did the footed onesie pajama craze start?

A longtime favorite in pajama fashion, the footed pajama is now a style generally set aside for young children to wear or as a novelty pajama for teens. I think we can all safely agree that there is just about nothing cuter than a toddler wobbling around in his footies while big sis slides across the kitchen floor in hers. However, did you know that originally that oh-so-cute full-body covering kid's footed pajamas were invented to help prevent bugs from gnawing at your skin while you tried to get a little shut-eye during a time period that was absolutely rampant with bedbug infestations?

How'd they come up with the name "pajamas"?

You think you speak English, right? What if I told you that you actually speak ... well, pretty much every language on the planet? If you think about it, that isn't even too much of a stretch. The English language is made up of bits and pieces borrowed from every land the English ever colonized, traded with, or explored, plus a healthy helping of words, phrases, and sounds that everyone who ever tried to overthrow the English forgot to take with them when they eventually retreated back to their homeland. The word pajama is Hindi: "pa(y)" means leg, attached to "jamah," meaning garment. Maybe your spice cabinet and your pajama drawer have more in common than you originally thought?

Which pajamas materials do we sleep best in?

Historically, pajamas were most comfortably made in the finer fabrics. Softness, comfort, cooling, and breathability have long been the main goal of pajama design. Fast forward to today's pajamas, and here we are ... still striving for the same things. Thankfully, the pajama industry has evolved to provide us with the best options to date: soft American grown Supima cotton, cotton/modal blends when we need a good stretch, ultra-comfortable 100% cotton broadcloth, and the breathability of lightweight woven fabrics...Take the advancements in pajama design and mix them with how far we've brought mattress technology (from literally sleeping on roped straw to memory foam with smart technology ... I mean, whoa) and we should all be sleeping like a bunch of big babies from dusk till dawn.

What qualifies as pajamas?

Are there rules we should all be following? What if you are sleeping over in someone else's bedroom? If only there were some sort of general rule ... Well, actually there is. When in doubt: pajama pants and a comfy t-shirt. When with company: pajama pants and tee, or nightgown. And don't forget your fleece robe. Slippers are a good idea, too. When overnighting at your significant other's pad: tank and sleep shorts or cool pajama pants...think lightweight woven materials, because two in one bed gets hot. When sleeping alone: all bets are off (but keep the pajamas on – a little something between you and your fresh sheets is a good thing, right?).

A nightdress made for dancing in your dreams.

Did you know that nightdresses only recently became thought of as a woman's pajama-style? I hadn't thought too much about men in nightdresses either until I spent a few years working twelve-hour nursing home night shifts. You can get into some very informative conversations with your favorite hundred-year-old resident when you're the last person she sees each night and the first to greet her each morning. Apparently, right up until the turn of the century, most men commonly slept in nightdresses. By the 1920s, pretty much just Englishmen or men from the British Isles wore nightdresses to bed, but that's about when it all came to a screeching halt. The trying hardships of the Great Depression and WWII changed men, the way we saw them, the way they saw each other, the way they wanted to be seen, the way they saw themselves...the whole bit. After 1946, "being a man" was thought to be best done with a bravado that left no room for wearing a dress, not even a nightdress.