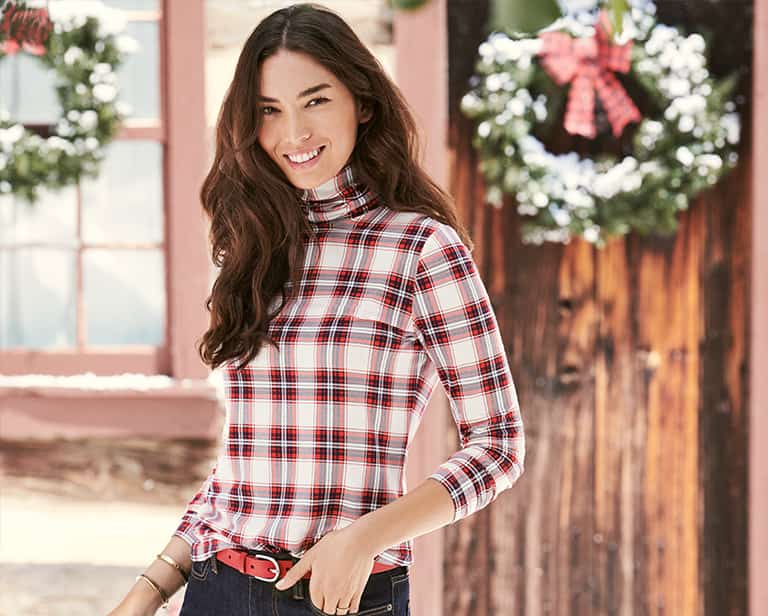 Turtlenecks have a solid place in the fashion world. The humble top is the ultimate layering piece–a true companion to see you through in style on brisk spring days, freezing winter mornings, and breezy fall evenings. In short, turtlenecks are highly versatile. Where would your wardrobe be without this cozy substitute for a T-shirt or a blouse?

Given that fashion is ever-changing, it's no wonder that another interpretation of the style eventually emerged: the mock turtleneck. Similar in construction yet with a slightly lower neck, this variation offers a more modern approach that some may find more appealing and comfortable. Both shirt styles, however, are game-changing options that have their place in your wardrobe. Here's how they break down.

Some people swear by turtlenecks for their ease. The garment is characterized by a layer of fabric that pulls up and covers the entire neck. This layer can be folded over once or twice for a cleaner, more refined look. The average turtleneck measures anywhere from four to six inches, but can be longer depending on the sweater's size.

By nature, the turtleneck is a warmer-than-average top that provides more substantial coverage than other options in your closet. You can wear it in much the same way that you wear other tops, too; for example, a turtleneck looks great beneath a tailored blazer and tucked into a pair of dress pants for a sleek and well-coordinated look at the office. A slouchier version with a more casual shape looks great with skinny jeans and pumps for a sophisticated take on cold-weather fashion.

It should come as no surprise that turtlenecks also have a significant place in history. Sportswear became the style du jour in the early 20th century, and at the time the turtleneck was worn primarily by men. It was warm, so it made sense for athletes to wear it while practicing and playing outdoors. At the time, it was known more commonly as the "polo neck" sweater.

Retailers eventually introduced women's versions, which became even more popular with the advent of high-necked blouses and dresses. The look characterized what was considered ideal at the time: a so-called "Gibson Girl" who, at the turn of the century, was bold, independent, fearless, and athletic. She was as elegant as she was sporty, and her wardrobe consisted largely of frilly pieces with elevated necklines.

During the 1950s, the turtleneck took on greater importance in the mainstream world. It was even a little bit edgy, and was often associated with beatniks and artsy types who embraced a chic, nonchalant style. It was the bohemian uniform of choice, and it remained popular in fashion circles throughout the decades that followed. Later, you may remember spotting turtlenecks on Rachel on TV's Friends during the 1990s and even on the fashion runways heading into the 21st century. Although the turtleneck's popularity may have waxed and waned over the years, it is considered one of the most universal and enduring wardrobe pieces in the world.

Fashion is ever-changing. The mock turtleneck is just another example of the growth and appreciation for people's desire to try something new and fresh. Building on the popularity of the turtleneck, the mock neck top features a slightly lower neck with two layers of fabric that are folded and stitched to create a more casual look.

Why wear this top instead of a standard turtleneck or women's sweater? The mock turtleneck lends the illusion of the famous high-necked top but is a bit less constricting. It's still a cold-weather staple, but it also makes a seamless transition to warmer conditions. You can wear a style with three-quarter length sleeves or even a sleeveless cut with a below the knee skirt for an effortless, pulled-together look that works well on warmer days. Otherwise, a style with long sleeves made from a substantial material like cashmere is a better choice when you need to warm up.

At a glance, the turtleneck and mock turtleneck really aren't that different at all. The mock top was inspired by the turtleneck, after all, and provides an alternative for those who love the look but just don't feel comfortable with the additional fabric gathered around their neck. With the mock turtleneck, you can still enjoy the benefit of wearing a cozy and comfortable top but with a bit more of a laid-back feel.

For a more polished look that works well in professional environments, a simple turtleneck in a solid hue works best. You can wear it as a substitute for your normal top beneath a blazer for an effortlessly polished look. If you work in an environment with a relaxed dress code, a mock style is also an acceptable choice.

The advantage of both tops is that they wear well with everything: your favorite curvy fit jeans, a pair of corduroy pants, a fit-and-flare skirt, and more. The options with turtlenecks and mock turtlenecks are endless. Have fun making each piece a core part of your wardrobe.