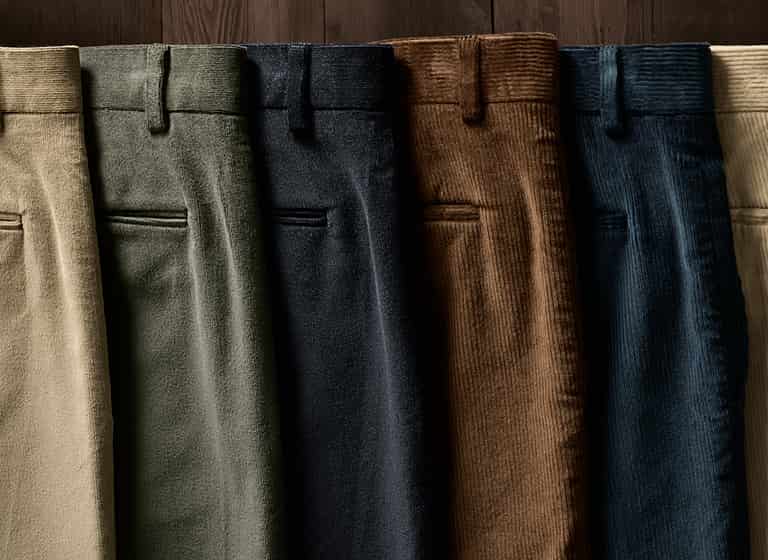 Are men’s corduroy pants in style?

For us, the question “are men’s corduroy pants in style?” is one that barely needs asking. In our view, the corduroy pant is up there with other staples of the male wardrobe, such as five-pocket jeans, men’s button-down shirts, and blue blazers that fit the very definition of the word “classic.” Like those other items, corduroy pants don’t go in or out of style–they are the very foundation of style itself.

The history of corduroy

The earliest ancestor of corduroy can be found in Fustat Egypt in 200 B.C. It was called Fustian. However, modern corduroy as we know it is from Manchester England during the 18th or 19th century. The name comes from the French words Cord Du Roi which means the king's fabric. Corduroy has always been popular for workwear because of its durability. It became especially popular in the 60s and 70s and some people thought of it as “anti-establishment” fabric because it had been used by workers for so many years. Corduroy is still a classic and popular fabric, today.

The aspects of corduroy

That being said, there are aspects of corduroy pants that may wax and wane depending on the style of the time. For instance, corduroy pants come both pleated and flat-front. Pleating was the norm during the ‘90s, a decade that saw oversized triple-pleats become the norm. Pleats retreated during the aughts, as the cleaner look of flat-front trousers became the norm. But pleats have recently returned to men’s pants once more, although this time there are less prominent and more often appear as a single-pleat.

No, not that kind of wale

Another factor unique to the corduroy pant itself is the “wale” factor. Wale is the term used to describe those raised ridges that give corduroy its unique texture and appearance. The amount of wales in a pair of corduroy pants is measured by something called a “wale count,” which records the number of wales that appear per inch of fabric.

There’s one more argument we’d like to make in the case that corduroy pants never go out of style, and that’s the sheer range of ways that they can be worn. If you want to keep it classic, wear corduroy pants in a tan or earthy hue with a men’s flannel shirt. The raised texture of corduroy makes it a natural pairing with equally texture-rich flannel shirts, and the more subdued khaki tones common in corduroy help to balance the vibrant colors that appear in a plaid pattern.

Alternatively, you could go for a preppy look by picking out a pair of corduroy pants in a brighter hue, such as emerald green, and pair them with a white button-down shirt and a blue blazer.

And then there’s the modern spin: find a pair of corduroy pants with a smaller wale-count and a five-pocket cut, and pair them with anything from a polo shirt and deck shoes to a black t-shirt and your favorite pair of sneakers. You can look for a more vibrant color to help make the look pop, or stick to a traditional hue of corduroy to deliberately contrast it with the rest of the outfit.

Whether you pursue the classic route or decide to break new ground, we think you’ll agree that men's corduroy pants have never been out of style, and won’t be reaching their expiration date anytime soon.