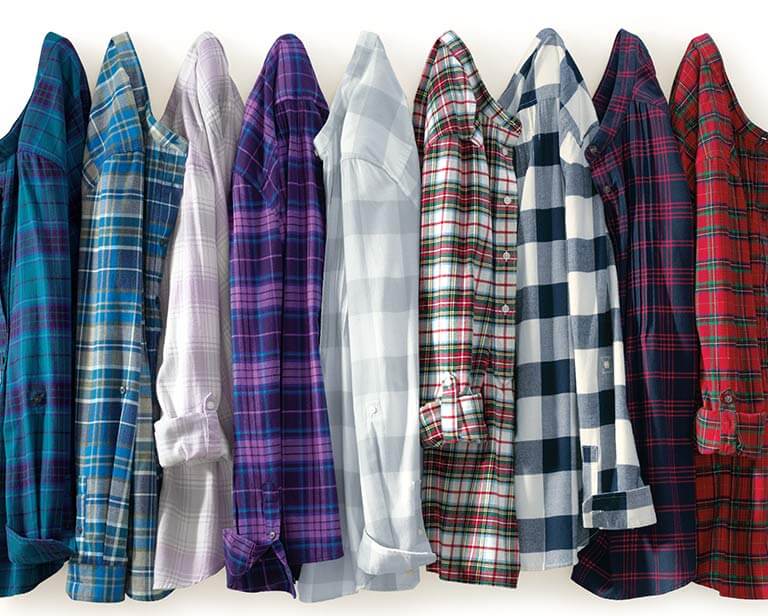 The History of Flannel Shirts: Origin and Timeline

Hands down it's one of the most loved fabrics for fall and winter, but how much do you actually know about the flannel shirts you're living in this season? Now that you've gotten serious about your love for flannel it's time to have the talk about where it comes from, where it's been and what plans it has for your future together. After all, you shouldn't jump into a relationship with something you know nothing about. Behold, the intricate backstory of the history of flannel shirts, and what it means for you.

The Origins of Flannel

Would you be surprised if we told you that historians have suggested that the origin of flannel—or a fabric similar to it—can be traced back to 16th century Wales? It makes sense that the fine people of Wales would want flannel shirt protection of some sort from the notoriously cold and drizzly Welsh winters. Their version of the material was the popular, warmer, and sturdier alternative to the wool garments that they wore at the time.

From Wales, flannel made its way to France and Germany throughout the 17th and 18th centuries until finally showing up in the United States during the Industrial Revolution in 1869. With a rapidly expanding railway system, flannel shirts proved to be made of a worthy fabric for the harsh working conditions and long hours of the American laborer. And it wasn't just used for shirts. Flannel long underwear, known as long johns, and warm flannel sheets, were also made by this time.

Flannel Through the Ages

By the early 20th century logging, railroad building, and construction continued to dominate the workforce in America. Men's flannel shirts soon became synonymous with blue-collar workers. During the Great Depression, they became even more popular as white-collar businessmen suddenly desperate for work found themselves wearing flannel shirts to laborer jobs instead.

Essentially by 1950, flannel shirts were thought of as the working man's shirt and considered a symbol of American hardworking ruggedness, which was only illustrated further by the introduction of the fictional character of Paul Bunyan. After all, can you think of imagery more masculine than a lumberjack styling a classic men's flannel shirt with his trusty axe thrown over his shoulder and his faithful blue Ox, Babe, by his side?

Flannel's image got a pop-culture do-over in the 1990s with the help of grunge rockers who wore flannel shirts as part of their trademarked low-key looks their fans loved. From here flannel spread like wildfire amongst their fans to mainstream fashion, eventually becoming a fashion staple of the younger generation. Part of the popularity was the sheer wearability of flannel. It was easy for anyone to wear, especially with the baggy men’s and women’s jeans that were practically uniform at the time.

By 2010, grunge style was out, but the "hipster" revolution gravitated towards flannel shirts for its earthy and artisanal feel. Once more this warm, soft, and functional fabric became trendy yet again. The new vibe, though, was more about all-around comfort and approachability. You could easily make a flannel shirt part of your regular cozy look—and not just by pairing them with jeans.

That’s because the modern world has brought with it countless iterations of flannel. There are women's flannel tunics that look right at home with jeggings and leggings. There are flannel shirt dresses that put a fresh spin on an ageless look. There are even hoodies lined with flannel, offering superior comfort when it matters the most—like when you’re shopping for holiday gifts or attending a football game. These are pieces that aren’t just comfortable, but also cool and stylish.

The Future of Flannel

The future is definitely looking soft and cozy. That’s because flannel isn’t going anywhere. The grunge years are well behind us, and there’s no question that the popular material continues to reign as one of the most comfortable in existence. That’s thanks in large part to its soft hand and meticulous construction. The smooth feel of the fabric as you graze your hand over the surface is undeniable. And what was once merely a plaid shirt has expanded into a universe full of flannel everything.

Another benefit? Kids happen to love them, too. The fact that their friends wear them may be part of the influence, but they’ll quickly grow to love the vibrant colors and soft touch of flannel. Flannel pajamas for boys and girls make every night cozier. You’ll even find festive styles that they’ll want to wear throughout the holiday season.

Not only can everyone in the family wear these wardrobe staples on their own, but they're also great items to layer under a down vest or cozy sweater for added warmth throughout fall and winter. You can easily wear this classic style well into spring by layering your beloved flannel tunic over a simple tee or tank top. Add a pair of leggings and motorcycle boots for a cool look from top to toe. For a different take on flannel style, layer it over a dress and knot it at the waist. Step into ballet flats or chunky sneakers depending on the style you want to achieve.

When it comes to your wardrobe needs, flannel shirts definitely put in the work to keep your relationship strong. A favorite for decades, this is one of the few garments that’s proven itself to be a true mainstay. The fact that it looks great with virtually anything from leggings to jeans is proof of both its longevity and its relevance to wardrobes through the decades.

That’s true for men, women, and kids alike. Sure, there are the pajamas everyone in the family can wear in total comfort. But flannel simply makes a practical addition to any well-rounded wardrobe. There are all types of pieces available, including shirts, dresses, robes, joggers, and so much more. You’ll even find slippers lined with flannel! This kind of versatility proves there’s truly nothing like this timeless, sinfully soft fabric.