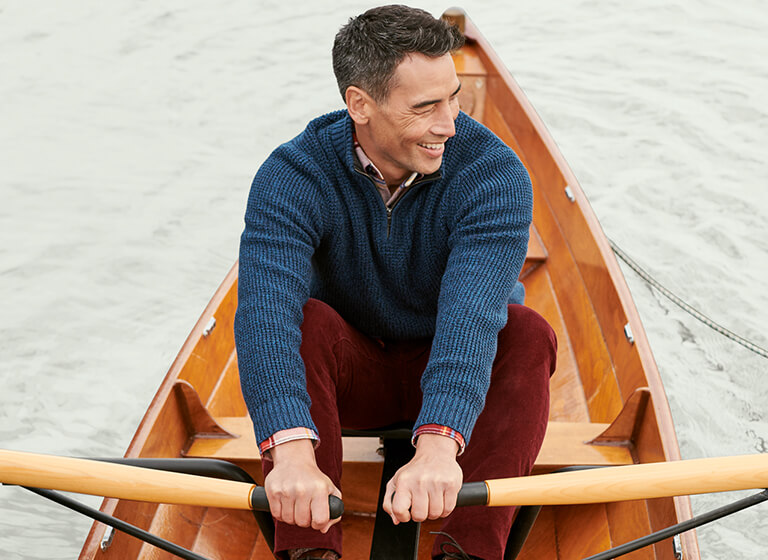 Once a part of every man’s wardrobe, the sweater has lost popularity to its modern descendant, the quarter-zip pullover. Which, frankly speaking, is a shame. Knit sweaters not only offer comforting warmth, they offer you a freedom of ease and movement that many of their cut-and-sewn cotton cousins can’t contribute. That said, we offer the following information in defense of the good old men’s sweater.

But first, some background.

Sweaters didn’t play a regular role in a man’s dress wardrobe until the 20th century. Prior to that time they were worn mostly for work (like the famed sweaters fishermen wore) or sport (skiing, biking, polo, cricket and the like) – which, by the way, is where the name came from: when you wore a sweater, you were planning to work up a sweat.

Somewhere along the line, sweaters came to occupy a rightful place in a man’s wardrobe as an everyday garment, not one reserved for sport. Sweaters with beefier yarns and textures were considered more casual, while sweaters knit from finer yarns were dressier. It wasn’t until the late 20th century that a man would even consider substituting a sweater for a men’s sport coat.

Today, sweaters are less ubiquitous than ever, thanks to their popular cotton counterparts: the cotton sweaters for men. Some think sweaters hard to care for, some find them “old-fashioned” and still others find the prices a bit daunting. Still, we think there’s a place for a sweater in every guy’s lineup.

What to look for in a quality sweater.

Hash marks. Look at where the sleeve is attached to the body of the sweater. If you see little lines that look like a two-toed bird left footprints, you’ve found gold. Those are “fashion marks” where the pieces are joined. A fully-fashioned sweater is shaped in the knitting: the body and arms are knit, then linked together – not sewn – to create the finished garment. The process is more time-consuming and expensive, but it’s the mark of better-made and better-fitting sweaters.

Some sweaters and most of today’s men’s cotton quarter zip pullovers are made by cutting pieces from knitted or woven materials and then sewing them together, like you would to make a shirt. There’s nothing wrong with that sort of construction: it’s sturdy and won’t rip out. But it creates a seam and a seam can rub you the wrong way after a long day of wearing. Fully fashioned sweaters won’t do that.

A word about storage.

Once you’ve found a men’s wool (or cashmere, or merino) sweater that you love, you’re faced with another dilemma: what do you do when sweater season is over?

Clean the sweater according to the manufacturer’s directions. Fold it carefully so as not to create any creases you don’t want next fall. Then put it in a cloth or linen bag or in a plastic tub with a cedar block or cedar balls made for this exact purpose, ensuring the cedar isn’t in direct contact with the sweater to prevent discoloration.

Why the cedar? A simple four-letter word: M-O-T-H. After all your searching for the perfect sweater, the last thing you want to find when you pull it out is a series of tiny holes (usually in the most conspicuous places!).

If that sounds like too much work for a garment you’ll wear only occasionally, just remember the long and lustrous lineage that makes up the DNA of today’s sweater: seagoing captains fighting the wind and waves, fisherman struggling against their nets. Wouldn’t you want to be a part of that?