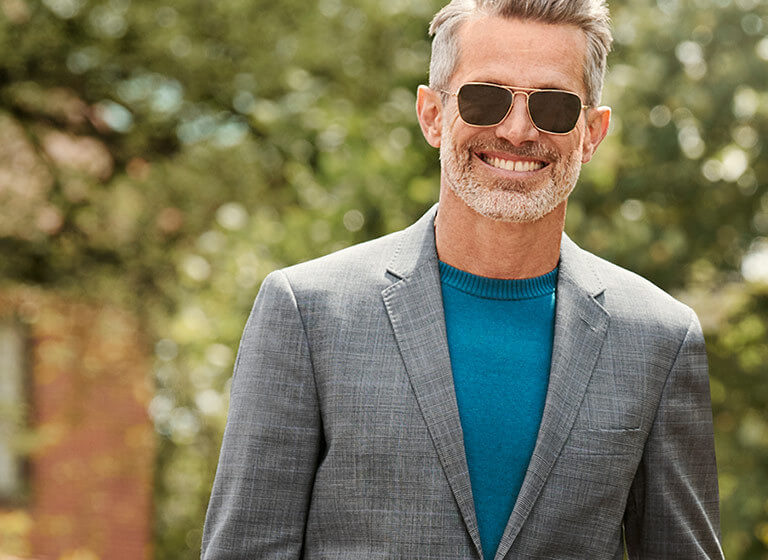 5 Things to Wear Under a Men’s Blazer

If you’re struggling for ways to switch up your wardrobe when a blazer is required either at work or for a formal function, you’re not alone. If you look around you, you’ll likely notice that lots of men tend to wear a typical dress shirt under a blazer day in and day out—which is totally fine. But if you want to be one of those few men who stand out from the crowd, you’ll want to be more creative and stylish with what you wear.

Wearing a blazer can make you look polished and put together without the formality of a suit jacket. Here are five recommendations for what to wear under a men’s blazer if you want to look handsome while also feeling comfortable.

It is surprising how many men shop for dress shirts assuming that they’re all the same, only to settle for ones that are stiff, scratchy or generally uncomfortable. Finding a well-made men’s dress shirt that you can wear under a blazer is a great thing, especially if the shirt stretches, feels comfortable and lightweight, and doesn’t wrinkle. This is probably the most formal look, and it always looks good with a tie (try a bow tie for fun). Alternatively, you can wear it with the top button undone and a T-shirt underneath for a more casual look. Just make sure you tuck it in.

It may not seem like the most obvious choice to wear under a blazer, but a men’s polo shirt is a wardrobe staple for lots of men, and it can look nice dressed up under a blazer and tucked in with a belt. Polo shirts are popular because they’re typically more comfortable as well, especially in the summertime when men want to get away with wearing short sleeves but want the flexibility to be able to throw on a blazer for an important meeting. Another great thing about polo shirts is that they don’t wrinkle as much as some traditional dress shirts do. Just be sure that if you wear a polo under a blazer, the collar is in good shape and has a good amount of starch in it so it doesn’t look awkward.

Don’t make the mistake of assuming that all men’s flannel shirts are the stereotypical “lumberjack plaid” made of warm cotton, wool or synthetic fibers. That was true back when they were initially created in seventeenth-century Wales to protect farmers from the elements. Today, though, men’s flannel shirts now come in a wide variety of types, from thinner, more summer-friendly ones to warmer styles for wintertime. They also come in solid colors that barely look like they’re flannel, but you’ll still notice the comfort immediately. Wear it just like you would wear a traditional cotton dress shirt under a blazer with a belt.

Unless you’re going to an extra-formal event or business meeting, a good-quality men's T-shirt can look pretty stylish under a blazer. Whether V-neck or a traditional crew-neck T-shirt, just make sure it is free of stains and holes and fits you well.

Ultimately, no matter what type of shirt you wear under a blazer, make sure that the blazer is made of a material that matches the material of the shirt you’re wearing underneath it. For example, you wouldn’t want to match a winter blazer with a summery, lightweight shirt or vice versa. Also, pay attention to the details. Sometimes it isn’t about what you wear so much as how you wear it.

Matching the right accessories—whether a watch, belt, handkerchief, tie or some leather loafers—can really transform an outfit. The fit is also important, as you don’t want to look like you’re drowning in a blazer that’s too big or suffocating in one that’s too small.