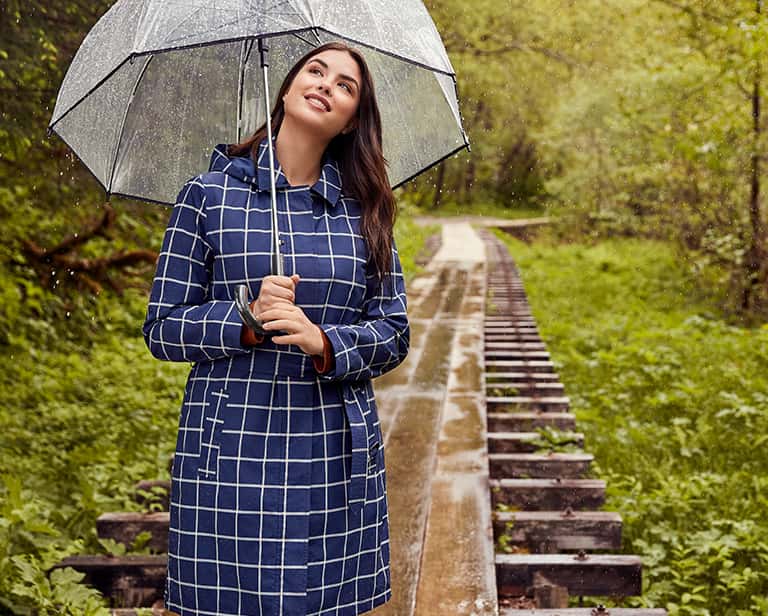 Have you ever been swullocking or walked through a blenky and realized you were not dressed appropriately for the weather? Yay .. me too, which is what prompted the need for the Lands' End Weather dictionary. Now you can identify weather patterns you didn't even know existed and plan the day's fashion choices accordingly. Follow these simple tips to understand the must-know weather terms and must-have fashions that go with them.

Very light snow. This word's root dates back to the 18th century when it was used to describe ash and cinders. A bit of blenky is certainly very pretty. However, if you have to walk through it, All-Weather Mocs and a lightweight down jacket provide all the warmth and coverage you'll need.

A twilight ray of sunlight shining through the breaks in high clouds. Crepuscular rays illuminate dust particles in the air. Lounge wear and slippers are the best attire for taking in this breathtaking view.

A widespread, long-lived wind storm. Derechos generally accompany bands of quickly moving rain showers and thunderstorms. They may also be called bow echoes, squall lines or quasi-linear convective systems. Basically, a derecho is a wind storm of serious proportion. You'll need windproof gear if you happen to be outside during a derecho. Throw on your Squall® parka. (Just think…we could have called our Squall a Derecho).

These little beauties are ice crystals that form in turbulent water. Search for frazil in swiftly moving streams and rough seas. Duck boots are the perfect footwear for frazil hunting.

A massive dust storm. Haboobs kick up in sandy areas during extremely dry conditions. Another word for haboob is sandstorm. If you happen to be outside during a haboob, I doubt it will matter what you are wearing. Your best bet during a haboob is to simply take cover.

The smell of the Earth after it rains. Apparently, that smell isn't worms. It is actually the scent of an oil released by the Earth right before it begins to rain. Who knew? You'll want to wear capris if you smell petrichor to avoid getting the bottoms of your pant legs wet.

A massive whirlpool of cold air that hovers over the Earth's poles (both north and south). During the winter, the boundary of the polar vortex expands, causing unsuspecting commuters to be caught in its path. (If you were in Wisconsin for the winter of 2018, you know exactly what a polar vortex is.) You'll want to be covered from your head to toe during a polar vortex. Wear a warm hat, gloves of mittens, a scarf, an Expedition Parka, snow bibs, wool socks and winter snow boots as your bare minimum when leaving the house until the weather changes.

A term used when the humidity is heavy enough to cause your hair to take a stand and go on strike. In all seriousness, swullocking is actually an older word used primarily in the southeastern states. It literally means sultry and humid. Work swullocking into your vocabulary as a summertime thunderstorm rolls in. If you're talking about swullocking, you should be wearing rain boots and a rain jacket with your hair in a messy bun.