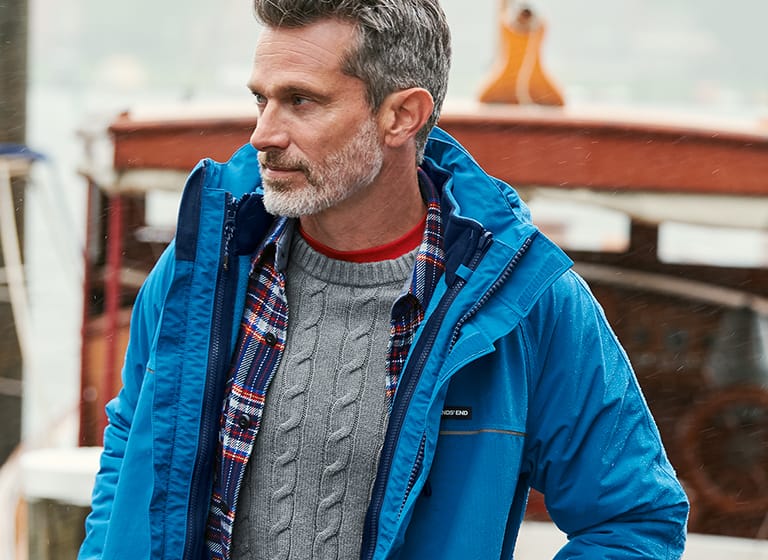 Of course, guys want to stay warm when the temperatures drop. But whether they'll admit it or not, they also want to look on-point while they do it. Luckily, there are several types of men's jackets that are perfect for trendy men who want to have both at the same time.

This roundup offers eight stylish options in fall-to-winter jackets for men. Each gives a guy the chance to stay warm and look cool while he's doing it, all fall or winter long.

Ever since James Dean, the men's denim jacket has ranked as one of the classic styles for men. And it's not hard to see why—denim jackets have a crisp, tailored style that turns almost anything else a man might be wearing into a cohesive outfit.

These functional pieces of outerwear can serve as a light jacket when the weather's chilly, come in insulated options for colder months, or serve as an edgier, draft-busting cousin of the men's cardigan sweater indoors during the coldest winter months.

(Bonus fact: When a denim jacket has two chest pockets, it is sometimes also called a trucker jacket).

If you think that athleisure is a look that's just for women and yoga pants, think again: Men have athleisure styles, too. After plain-old sweats, men's most popular athleisure options show up in outerwear.

There are two distinct styles of athletic-inspired jackets for men. The first is the team jacket, which can be a track jacket or a varsity jacket. The second is a more outdoorsy athletic look, which is reflected in items like men's fleece jackets that are designed to be worn on outdoor adventures.

Both styles of athletic-inspired jackets are designed for cool days, and each lends a hip "I'm in shape" feel to any outfit.

No men's jacket roundup would be complete without a shout-out to the trusty men's rain jacket. These outerwear workhorses are always in style because they're always necessary. Men's rain jackets are designed to be waterproof, and they offer varying degrees of protection against cold weather and wind, depending on their style, fabric and insulation. Most rain jackets have a preppy, New England vibe that gives off a clean-cut and adventure-ready feel. That makes them very trendy in our Instagram-mad world (even when it's not raining).

One of several types of outerwear that was inspired by military uniforms (see also: trench coats and pea coats), the bomber jacket has a clean, casual look that manages to be classic and trendy at the same time. Bombers usually feature fitted waists and cuffs, zippers and zippered pockets, so they tend to look like they fit perfectly. It's a clean look.

True to their origin, bomber jackets were traditionally brown, black, or olive green. Today, however, they come in a rainbow of colors that allow a man to make a more personalized fashion statement. They also come in a range of weights that make them a good fit for many different forecasts.

Equally popular with rappers and polar explorers, puffer jackets have been on trend for years, and that popularity doesn't seem likely to fade any time soon. These soft coats offer wearers a mix of sporty functionality along with their fashion chops. Puffers come with a huge range of insulation weights, so it's easy to find one that'll fit well with your local weather. They also come in a mix of colors ranging from muted neutrals to ultra-bright hues, which means wearers can choose a look that lets a little more personal style shine through, even on the coldest days. Some puffer jackets are designed to be packable, which can make them an excellent option for wintertime travel.

Men's Parkas were invented by the Inuit people. With that far-north heritage, it's easy to see why they've been known through the years for their wind-blocking warmth.

These waterproof jackets are lightweight and easy to get on and off (unlike anoraks, which are pulled over the head). They can provide protection against everything from a rainy fall day to a blustery winter one.

Parkas are popular with trendsetters who appreciate the vibrant colors and no-nonsense functionality of a parka's design, along with social media influencers, who want to look like they can handle a tough day of outdoor adventure.

Another military-inspired coat, the men's peacoat is a double-breasted wool jacket that is designed after the jackets that were worn by sailors in the navy.

Because they're wool (or a blend of fabric designed to look like wool), peacoats have a more tailored, slightly traditional feel than sportier options like bomber jackets or puffers. That makes them a great match for outfits that aren't dressy but aren't quite as laid-back as a denim or athletic jacket outfits might be.

True, they're technically not jackets. But men's vests are a fashion favorite that often does the exact same job, taking the place of a regular jacket when the weather is in between cool and cold. One vest option is a fleece vest, which has a casual and relaxed style that blocks out cool breezes on in-between days. Another option is the down vest, which is more insulated to block out even more chilly air.

One key advantage of vests over almost every other outerwear option for men is the fact that, without sleeves, they allow greater ease of movement. Another key advantage? They let the good looks of the outfit underneath shine through.