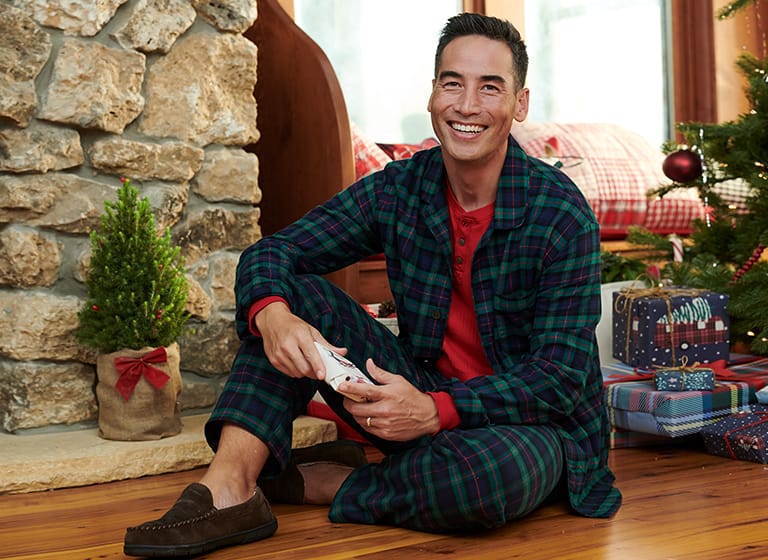 Get a Good Night's Sleep with the Most Comfortable Men's Pajamas

For men, the question of which cozy men's pajamas should be actually worn in bed isn't considered enough. Sure, it's easier to undress at night and stay in the same briefs or men's boxers that were worn during the day until the next sunrise comes up, but guys, you're missing out.

There comes a time in fall and winter when that approach just doesn't hold. Temperatures dip, frost appears on the windows, and the walk from the bedroom to the bathroom can get downright chilly. You also have your beloved thermostat to consider. If you’re wearing a cozy set of pajamas, do you need to have your thermostat set as high? It’s definitely something to think about.

A better way to ensure you stay warm in bed and out is with warm men's pajamas. For too long, men have neglected the benefits that come with wearing pajamas and ignored the current diversity found in today's pajama styles. To correct your course, or simply find your favorite new piece of soft men's pajamas, pay attention to this list and upgrade your sleep with cozy men's pajamas.

We consider a good pair of men's flannel pajama pants to be the gateway piece to truly enjoying sleepwear. After all, flannel pajama pants are something that you can ease into outside the context of wearing them as pajamas. They'll prove just as cozy when worn on the couch watching Netflix, or in the kitchen fixing a midnight snack.

But make no mistake: flannel pajama pants are among the coziest pieces of sleepwear around. Thanks to the brushed quality of flannel, they have a natural ability to trap heat, improving insulation.

Flannel pajama pants also provide a more versatile alternative to the flannel pajama set. While we love the idea of wearing head-to-toe flannel on a chilly winter night, that scenario isn't as necessary in an age of central heating. By providing the option to only cover your lower half, flannel pajama pants offer a more practical solution.

If flannel pajama pants are the gateway to wearing pajamas in general, a sleep t-shirt or a men's Henley shirt matched to a pair of pajama shorts is the precursor to owning a full pajama set.

A men's sleep T-shirt is a great piece to ease into because it's just above wearing an old undershirt to bed. Like that broken-in t-shirt you've been wearing to bed for years, sleep tees will prove to be extremely comfortable with the added bonus of extra ventilation. Thanks to the short placket found on a Henley, you can unbutton a few buttons if you find yourself overheated at night. That's a far better option than simply pulling it off of your head.

For more warmth below the belt, pull on a pair of men's pajama shorts. You can think of pajama shorts as being like your favorite pair of boxers but made in a greater length to provide extra coverage on those cold nights. And like flannel pajama pants, they'll prove just as useful for lounging around the house before bed and over that first cup of morning coffee.

Enough of easing into it; if you've enjoyed wearing a sleep henley with pajama shorts, you're ready to take on a full pajama set consisting of a matching pajama shirt and pants. Pajama sets are most often made from cotton, which strikes the middle ground between insulating and overheating. And thanks to the coverage provided by long sleeves and full-length pajama pants, you'll be fully protected from errant winter chills.

Even better, pajama sets bring a little extra formality to the morning. Even if it's just you and your significant other reading the paper over bacon and eggs, doing so in a pajama set adds just a touch of old-school charm to the scenario that you'll both enjoy.

Men's bathrobes aren't capital-S sleepwear: no one is actually cinching up a bathrobe and crawling into bed. However, we feel comfortable placing them into the pajama category because of how well they suit themselves to mornings. During the time of the year when pajamas are only necessary outside of bed, you can throw them on first thing in the morning and wear them downstairs. And when things start to get a bit colder, you can wear them as an extra layer over your t-shirt and flannel pajama pants or matching pajama set. Nothing matches the most comfortable men's pajama pants better than the most comfortable men's bathrobes!

If you haven’t found a set of pajamas that suits your likes and dislikes, consider mixing and matching. No one said you need to wear a pajama top and bottom that match. So, maybe you prefer cotton pants, but a fleece top. Sets aren’t always made like this, so buy both and mix and match to your comfort. You can also sometimes buy individual pieces and match them up as you like. If there’s a piece of the pajamas you don’t like, donate them. Many organizations love pajama donations and then you’re not holding on to something that you don’t use.

No matter what your taste is, there are pajamas for you! Just give them a chance. You won’t be disappointed.