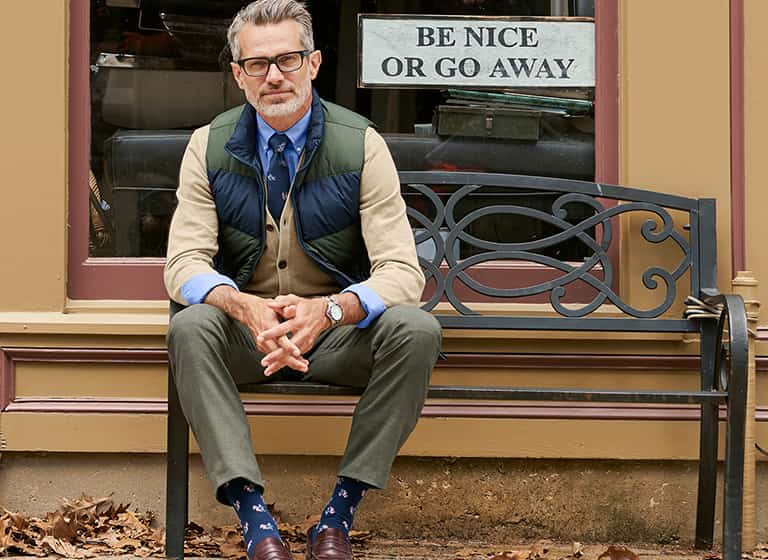 How to Wear a Cardigan With Style: A Men's Style Guide

It’s little wonder that the men’s cardigan sweater is such a versatile and adaptable men’s sweater. The cardigan can be considered the missing link between the worlds of sweater and shirt. Like a sweater, it is a knit garment worn as a layer, typically made from cotton or wool. But like a shirt, it has a button front that means it can be worn without having to be pulled overhead.

But those buttons do more than just provide easy access. They also allow it to be styled differently–think about how different a cardigan looks when it is buttoned down to its final button compared to when it is worn open.

This adaptability allows the cardigan to be worn with a wide array of diverse clothing and looks. Here's how to wear a cardigan sweater with style.

With a Flannel Shirt and Jeans

Perhaps the easiest way to wear a cardigan is with a warm men’s flannel shirt and a pair of your favorite, broken-in men’s jeans. Not only is this combination casual and comfortable, but it’s also a classic fall look.

One of the reasons that flannel shirts pair so well to cardigans is because most cardigan sweaters are dyed in a solid color. A solid-colored cardigan, particularly in a cold color like blue or grey, becomes a neutral backdrop that pairs well to even the most colorful and busy of plaid patterns. You can think of a solid-colored cardigan as the canvas, and the flannel shirt as the paint.

By wearing your cardigan open, you can also expose more of the plaid shirt’s pattern, adding extra visual appeal and interest to the look. Right now, imagine yourself wearing your favorite flannel shirt with a cardigan, hands resting in its pockets, crossing a leaf-strewn field on a crisp October day. If that image doesn’t get you excited for fall, we don’t know what will.

With a Button Down and Khakis

The pairing of a men’s button down shirt and khakis to a cardigan is just a peg above a flannel shirt and jeans in terms of formality, but it’s just as easy to wear.

This prep-inspired look relies on two staples of the classic Northeast American wardrobe: a beefy oxford-cloth button down shirt and a pair of men’s khakis pants. While these two items of clothing are often worn in tandem with a blue blazer, you can dress them both down with a cardigan for a look that’s softer, more comfortable, and just the right amount of slouchy. To really embrace the look’s polished yet relaxed aesthetic, you can leave both the shirt and pants un-ironed and pleasingly wrinkled.

With a Dress Shirt and a Blazer

A three-piece suit can be enjoyable to wear, but it’s also a little tricky to pull off. Adding a vest to the mix makes the entire ensemble more formal, but it can also make it appear rigid or old-fashioned.

An easier way to capture some of the charm of the three-piece suit without risking its rigidity is to wear a soft cardigan sweater instead. Leave the bottom button undone, just as you would with a suit vest, and unbutton the top button to expose some more of the tie.

Rather than trying to match two colors that may be of similar yet different hue–for instance, a grey suit and grey sweater–go for a deliberate contrast. Blue suits with grey cardigans, grey suits with blue cardigans, etc. The color contrast will add more aesthetic interest, and further loosen up the look.