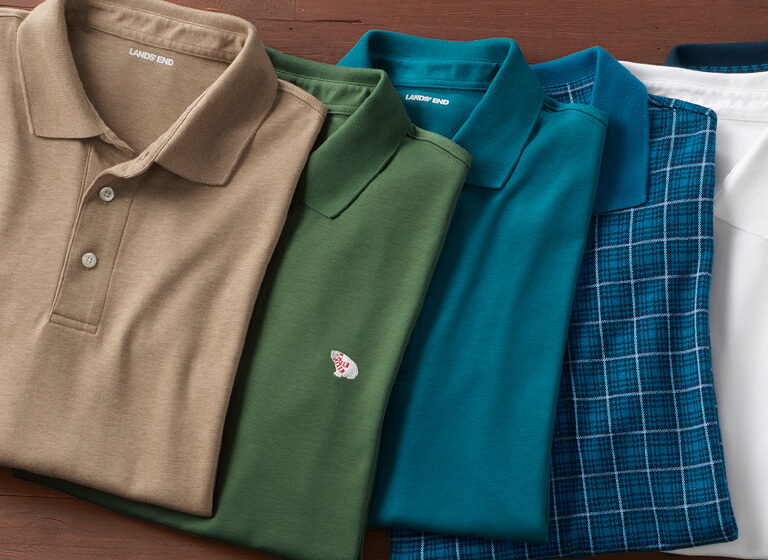 Taking a look at the evolution of men’s dress shirts, it’s amazing how much they’ve changed. Let’s start with the sixteenth century when the “ruff” collar was in style (think William Shakespeare). The equivalent of showing off a costly watch, the ruff collar was a status symbol that looked a bit ridiculous. Its pleats extended to the shoulders, sort of like one of those collars they put on dogs after surgery. Fortunately, the basic dress shirt has changed quite a bit since then, especially as what’s acceptable to wear in the workplace has changed. Here are our picks for three stylish shirts that can make any man the best-dressed man in the office.

You may not realize this, but the trusty men’s polo shirt dates back to 1933 when a tennis player named René Lacoste started creating them based on a shirt that his polo-playing friend wore. The office-casual staple can also be dressed up easily by being worn under a blazer and tucked into a pair of men’s dress pants. The fabric used can also make a difference, with cashmere taking the cake in terms of style. The crispness of the collar also matters as a stiffer collar creates a more polished look. You can also layer polo shirts, either over each other or over a plain t-shirt. Overall, a polo shirt worn on its own says that you’re casual but not too casual. Worn with a blazer or layered, it can certainly earn you points for being the best dressed in the office.

Men’s flannel shirts are typically made of cotton, wool, or synthetic fibers. However, when they were initially made in 17th-century Wales, they were made purely of warm wool to protect farmers from the harsh elements. From Wales to the United States, flannel became popular on this side of the pond in the late 19th century, when Hamilton Carhartt started creating clothing specifically for working-class men. Its durability and comfort have been loved ever since, reaching increasing popularity in the 1990s when grunge was the style. Today, the flannel is still going strong, from senior citizens to hipsters who appreciate comfort and style. It’s just up to you to style it properly, preferably tucked in with a men’s belt. The color also matters, as a solid color can give a more polished look than a plaid design, which is what most people mistakenly think of when they envision a flannel shirt.

Corduroy originated in Manchester, England, in the 19th century as a kind of clothing that would endure factory work day after day. Besides being durable, it is also soft and warm. However, it hasn’t always had a reputation for moving with the body or being stretchy. These days, men’s corduroy shirts might have a little bit of added stretch to make them even more comfortable yet stylish. And to be best dressed in the office, it’s the details that count. Look for buttons on the cuffs, a button-down collar, and a breast pocket. You can even add a handkerchief (or pocket square) to the pocket. Just remember that if you pair it with a men’s tie, the handkerchief should be of a different color or at least a different design.

With office-casual becoming more and more popular, a well-dressed man can be difficult to find. If you want to stand out above the rest, you don’t have to do it with formalwear. You can look quite dapper in a pair of jeans and a shirt of good quality, as long as you know how to wear it. Look at the outfit as a whole and take into account whether you can add a watch, a tie, a handkerchief, some cufflinks, a belt, some cool socks, or a great pair of leather loafers. It’s ultimately less about the shirt and more about what else you wear with it. Don’t forget to add a touch of confidence, too: The way you enter a room can garner just as much attention as what you wear doing it.

There are two things to look for in dress shirts: comfortability and professionalism. You don't want something too tight or too revealing but at the same time something so loose that it makes you look unprofessional or disheveled. This is where Pinpoint comes in. It offers both comfortability and professionalism, so much so it'll keep people asking about where to get one for themselves, especially if the fit looks like it was just tailored for you.

At times the job can call for some traveling such as out-of-town meetings, conferences, and retreats, therefore it’s always a good idea to pack a few dress shirts such as the No Iron Supima Pinpoint Buttondown Collar Dress Shirt because it packs well. Since the material is made with Supima, the fabric looks pressed all day because who has time to iron when they’re on the go? A nice feature about our Pinpoint dress shirts is that they are able to wick moisture away which is great if you tend to sweat during a presentation or are visiting a client in a hotter climate. Another convenient characteristic about our pinpoint dress shirts is the stain release feature to keep your shirt looking newer a lot longer.

Although there aren’t many rules when it comes to styling, there is just one that must be followed when it comes to wearing the pinpoint shirt — it must be tucked in for it to look good. Tucked into a pair of dress pants with a pair of dress shoes and a blazer are all the basics you need for a polished look. Of course, we can’t forget the accessories such as a belt and a tie.

The turtleneck is a classic dress shirt that has been around forever. It's not dress-code specific, either so you can dress it up or dress it down. Be warned though: turtlenecks are known for being one of the most difficult shirts to dress well. But if you have a few easy tricks up your sleeve, rocking the turtle is an easy task. Turtleneck dress shirts are great because they're dressy enough for the office, but you can also dress them down with jeans or dress pants. Depending on the dress code of your workplace, wear a suit jacket or a cardigan. For more casual affairs where blazers aren't as welcome as they would be at work, pair it with dark denim and dress shoes to show some respect for those more professional occasions.

Having a few of these shirts in your work repertoire will make dressing for work a cinch every morning.